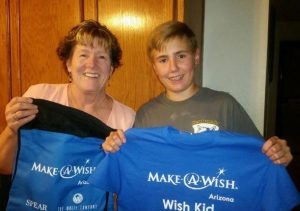 Longtime Yuma real estate agent Shelley Ostrowski is known for her leadership at Yuma Association of Realtors.  That role let to another volunteering passion which has just won her a statewide award.

Make-A-Wish Arizona named Ostrowski Volunteer of the Year, honoring the more than 70 wishes she’s helped grant for children with life-threatening illnesses since 2006.

That year, she was YAR’s president, and Make-A-Wish was looking for volunteers at a time when “there really wasn’t any, in Yuma,” she said.

“(They) asked if I would talk to my realtor members, maybe it would be something we could consider and (they) they could make a presentation, and I said, ‘Well I would love to do it myself,’ And so I got started and I never stopped,”

She’s since become a regional volunteer captain and Yuma County currently has seven active wish granters, including for more people from her Century 21 office.

“I kind of bring them in with me, say ‘Cmon, you gotta try this, you’d be great at this,’ and they’ve been a blessing because we need Spanish-speaking (volunteers), Ostrowski said.

Local children and youth approved for wishes are contacted by at least one wish granter within 24 hours, and two are eventually assigned to each case.

“The easiest wishes are probably the Disney wishes,” she said.  The hardest are sometimes the celebrity wishes, they want to meet someone, because they can wait a long time.

“They have to understand they may be waiting for a year, two years, could be three years.  I’ve still got a few kids waiting for that,” she said.

Arin Lopez, director of volunteer services for Make-A-Wish Arizona, said Ostrowski was picked for the statewide award out of about 750 volunteers because “Shelly’s passion for ‘wish kids’ is only rivaled by her love of the Yuma Community.”

She said Ostrowski mobilizes the Yumans around her to meet the wishes of local kids who are ill and in need of a morale boost.

“A wish transforms the lives of children, their families and entire communities through the dedication and efforts of volunteers like Shelley,” she said.

As a breast cancer survivor, Ostrowski can relate all too well to the fears and questions the wishers are facing.  But she doesn’t directly bring up her past battles very often.

“What it does for me is some of the kids are very shy, very withdrawn, and when you can talk about what they’re going through, say, ‘I see you have a port, or ‘is that where your treatment goes?’ You can understand.”

And she does recognize the difference between being critically ill as a child versus a grown-up; “We as adults have a lot more tolerance for these things, but these are just kids.  They should be out running and playing, and not even worrying about this kind of stuff.”

Due in part to medical advances over the years, Ostrowski hasn’t had to watch many of the wishers succumb to their illnesses.

“There’s been a few, and it’s always heartbreaking, because you get to know them on a personal level, you know the grief their family’s going through … I’m still in contact with many of my kids from 10, 14, years ago,” she said.

Watching them deal with the effects of their disease is still difficult, of course, even if they prognosis is good.

“People often say, I don’t think I could do that, but seeing what these kids go through, these kids give you strength you didn’t know you had.  You see what they’re dealing with and you say, boy, I’ll help any way I can,”

She’s working on 10 more wishers right now, which will put her up past 80 and close to that 100-wish milestone she’s eyeing.

For Ostrowski, what keeps her going on that path is the kids, “They bring so much to me in their journey that I can’t imagine not doing this.”